"Little English boys were supposed to be perfect."  After a year-long agony of operations, complications, and more operations; then learning to walk on the heavy and punishing government-issue limb without a discernible limp, Bart commenced the masquerade of able-bodied that he would play in public for the rest of his life.

The burden Sarah's father bore, his "desperate shame" and the stress of living a lie, took its toll on him and the people who loved him.  If only Bart had known--that his success as a lover was not incompatible with the mutilated body concealed beneath his trousers.

Bart was a young actor on the London stage when he was called to the Front in World War I.  His worst fear--that he would be mutilated--became an irreversible fact.  The goal of rehabilitation for the thousands of disabled veterans was that the patients should be restored to normalcy--it ought to be as though nothing had ever happened.  Bart was determined that no one who looked at him should ever know. 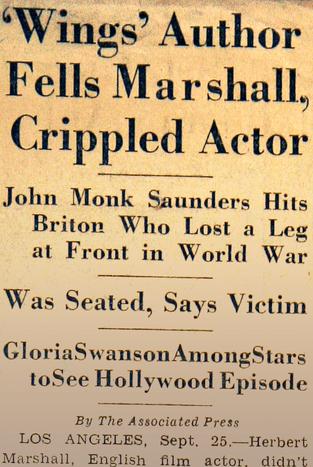 In 1931, she was called to Hollywood, then created a sensation by deserting an MGM sound stage to board a train and cross the continent to be with Bart, who was creating a stir of his own on Broadway.

The real secret about Herbert Marshall that Hollywood took to the bank, but couldn't name, was hidden in plain sight--his difference was an essential part of his appeal.  By the mid-1930s, Bart's salary per picture was second only to Gable's, but Bart was "the opposite of Gable."  It's not that what was different about Herbert Marshall wasn't known.  What's important is that it couldn't be named.

Our film is about Sarah's "family romance."  It's also about classical Hollywood's encounter with disability.  Bart's career depended on the discretion of acquaintances, co-workers, and the Press.  Why was it necessary for Bart to pass as "able"?  Why was it understood that evidence of his disability should be erased from the screen?

Edna Best was the darling of the English stage, and married with twin toddler boys when she fell desperately in love, and flaunted Georgian propriety to share a love-nest with also-married Bart.  Edna risked all for love--her career, even separation from her boys.

Events unfold like a drama that rivals any Hollywood scenario.  There are scandals, secrets, great courage, a great love, and a villain who threatens to expose Bart's disability and jeopardize his career at its peak.

Herbert Marshall remains Hollywood's only disabled screen idol.  A gentlemen's agreement protected his secret, but what was the real secret about Herbert Marshall that Hollywood took to the bank, but couldn't name?